i was out cleaning up after my pup tonight, when all of a sudden i heard a scratchy kitty cry.  i turned around and there he was right in front of me!

i couldn’t believe my eyes!  he wasn’t but a cppl feet away from me and was extremely vocal!  apparently all it took was 2 cans of food-from previous feedings-to get him to trust me!  at first i hesitated reaching out to him because what if he reacted aggressively?  that was the furthest from his intentions tho!

This boy is a lover!

a very experienced fellow cat rescuer, who specialty is ferals, had this boy completely tagged!  john, as we’ll call him, said he was a turkish van and that once these kitties get mad at someone, they get up and leave.  earlier this last weekend, Catsanova was nowhere to be seen, and his “people” were here at the trailer next door looking for him everywhere.  ….he was nowhere to be seen, and i was even concerned as i had just seen him earlier the previous friday evening. i had hoped that he had returned home, or that maybe they found him and were keeping him inside or was he hiding because he was angry at them and didn’t want to go home like my john had suggested? 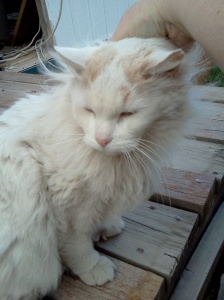 his meow is a low scratchy one.  he couldn’t stop talking especially if i wasn’t petting him.  it really felt like a plea, and it did just break your heart!  well it did mine!  i ran inside to crab a can of food, acting quickly because i didn’t want him to leave.  he wasted no time making it’s contents history.  i videoed it with my cell phone.

another video shows what a lover he is!

while petting him, i was able to observe his condition.  he’s not nearly as thin as i thought he would be.  he is dirty and matted and it was impossible to tell just by glancing from his backside whether he was actually a male or female. his backside is also a mess.  his ear is tipped, which could possibly mean that he’s been spayed or neutered, and his stomach also has matts as well.  it would appear that either some teeth have been removed, or have rotted as his tongue will occasionally protrude, which for me just made him all the  more endearing.  His feet are huge, and surprisingly, he is a poly-dactyl kitty! 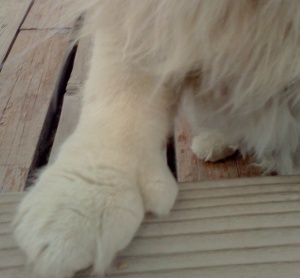 he not only purred, he rolled and made scratchy kitte mews.  i so wanted to just take him n hold him, but was afraid that if i tried to pick him up, he would freak.  i swore to him to find him a better home, and that i’m intent upon!

i stepped into the house for minute to do a quick check on my dog.  what a sweet sweet loving kitty!  i can see him cleaned up.  all handsome and healthy.  lying in the window of some warm home where he is appreciated and given the care he is deserving of.  when i went back out he was gone.  as sudden as he was there, he was now gone.  he’s good at hiding. and now the mission to make that promise of a real home come true! 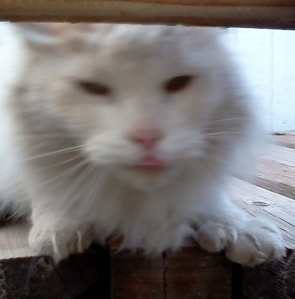 a blurry image of Catsnova with his tongue partially out