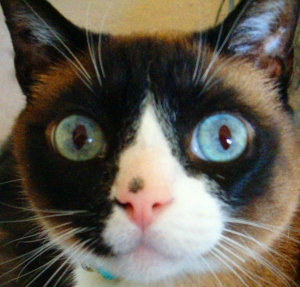 He’s the oldest of all the kitties; the Lion King of the household so to speak.  Mellow and a HUGE fan of sleeping, Eli wasn’t always this calm.  As a kitten he tore through the house like a mad ninja shredding anything and everything in the way of his claws-I replaced furniture thanks to him-and he would pic on the other 2 kitties in the household at the time, only to jump on my lap to get a good scratch and a quick nap.

Adopted from a litter of farm kittens, I chose between him and his brother who was a flame point seal-later I wished that I had taken them both.  On the way home in the car, Eli sat on the seat next to meet nervous an unsure, I’m certain, of what was to come.  I petted him and he suddenly rose up when the caress hit his shoulders…hmmmm…that felt pretty good!  I do believe that from that point on he was mine, or decided I was his as the case may be!!  He was quite the little “varmit critter” at the time, my pet nickname for him, and when I took him to the vet to be neutered he raised heck in the crate and the vet was not looking forward to letting him out! lol 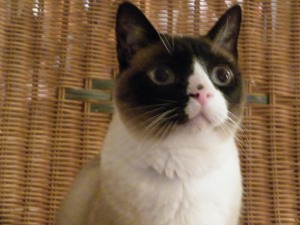 keep your eye on the toy!!

It took me sometime to name him and while I considered Napolean, I wound up settling on Elijah Moses-Eli for short.  (All my pets have middle names).  He would also quickly become a close companion of my dog Keehta and I would even be able to take them on walks together; both leashed as Eli was a strictly indoor kitty.  When I wouldn’t take him with us for a walk, Eli would sit at the sliding door to the porch and hollar his head off which could be heard all over the neighborhood when walking just Keehta! lol

A year later I adopted a little grey kitten named Ashley in an attempts to give Eli a companion to play with so he’d quit bugging the 2 older grand ladies of the household but unfortunately, all he did was teach Ashley all his little tricks of terror for picking on the older cats.  :S 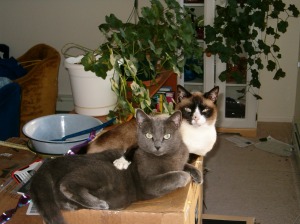 In their young years, Ashley and Eli were close, but a cppl of years later I took in a special needs kitten who would turn the close 2some into a close 3some.  Until that time, the 2 of them did a great job of bugging Lizzy and Cinder the old ladies of hte house and pretty much creating their share of accidents, messes, and getting into mischief for the most part.

In his older years, Eli has mellowed dramatically.  I will say one thing for him tho, he has always openly accepted any and all critters that came through the door to join our family.  I don’t know if this is because he came from a farm or what, but I’ve always found it very endearing about him.  He’s even been known to bathe and cuddle with new kittens-as long as they leave his tail alone and don’t treat it like the greatest new toy in their lives! LOL  Nothing makes him grumpy faster than his tail being messed with.

magnetic eli. no matter how i moved my leg, he clung!

He’s also become what I call a magnet cat.  In a demand for attention, he will settle himself on one of my legs and refuse to leave until he’s gotten his fill of petting.  He’s also been known to plop himself down on my hands when I’m at the computer keyboard, of even chew on one of the computer cords to get my attention from whatever I may be watching!  He’s a smart little booger! LOL

Eli is the first to let me know when the food bowl is empty and when the water is running low, and in his  younger days, he and Keehta would even share the dog kibble!

Even in his older years, Eli has proved to be entertaining you might say.  Last winter he won the competition for the most “embarrassing” pet in a contest with the blog I HAVE CAT.  For the details on this “award”, acknowledgement, etc., go to http://ihavecat.wordpress.com/giveaway-winner/.  It’s still too embarrassing for me to go into detail here about it, but this does a GREAT job of explaining why Eli is also nicknamed “FREAKBOY”.  :S lol

An endearing trait of Eli, is his impression of Stevie Wonder that sneaks out when he’s playing.  I don’t have a picture of it, but it’s quite entertaining, however, these days, Eli is usually more likely to be sleeping than playing with kitty toys, alltho string of any kind will get him going for at least a few minutes!!

The absolutely best thing about Eli, is his constant desire to cuddle  especially on a cold winter’s night, and when it’s chilly there’s nothing like Eli curled up against my back or on my feet!  (Interestingly, the new man in my life is quite a good cuddler as well..hmmmmm…anyways back to Eli LOL)

And so I raise a glass to Eli, my constant buddy, friend cuddler, and yes, even freakboy! lol 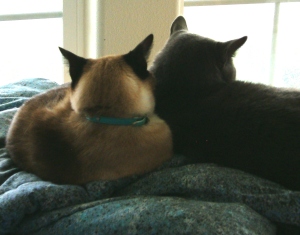 8 thoughts on “Eli the wise old sage (aka Freakboy lol)”