so today was Kitten Palooza day at High Tails Cat and Dog Outfitters, who graciously allowed me to use their room from noon until 2pm to host a meet and greet for the kittens.  we currently have 8 as JP and Kaydence were previously adopted.  Henri and Portia were adopted only to be returned because the adopters didn’t know and weren’t patient enuff to go thru the process to let their 1 yr old kitty aclimate to kittens in the home-isolated initially in a seperate bedroom at first.

we had a few applications and i hope for some adoptions in the coming week or two.  someone also didn’t get there in time and called to inquire as well and i sent pics to them tonight.  as you can tell, all of them have done some growing and i can honestly say that the Hissenfitz are finally healthy!  (Tate, Esme, Aubree and Zelda)

they were out earlier entertaining me while i was gettting their dinner ready and tidying up the nursery a bit.

and lemme tell ya, trying to get them to hold still for a picture, ….well only Tate made it easy! 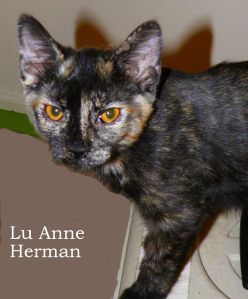 Aubree with the intense eyes!! 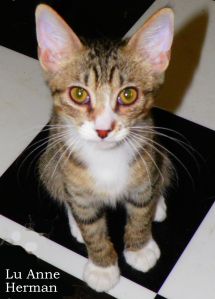 Tate is just the most affectionate little guy and yet at the meet and greet today he hid!  so we now know he’s affectionate but shy!  i would call for him and he would come out but then duck back under if someone knew came into the room.  arrgh!  and he’s such a great little guy that i would like to see get adopted for sure! 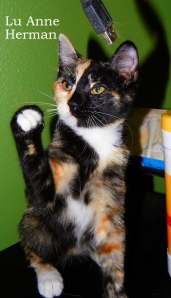 Zelda was very playful and was popular due to her interesting markings and face!  this little girl really came out of her shell today! 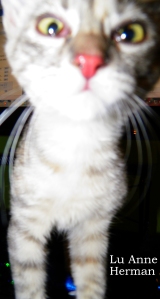 Esme put the P-L-A-Y in play today!!  she went crazy for a feather wand teaser and played so hard she was literally panting!!  i didn’t know this girl had it in her!  dun let that fool ya tho, she is very affectionate as well!  was soo good to see her play so much after how sick she had been!  (ironically, she apparently didn’t want her pic taken tonight because she looked irritated in all of them, pretty much! LOL)

the Floofenfurz weren’t left at home.  they came along too! 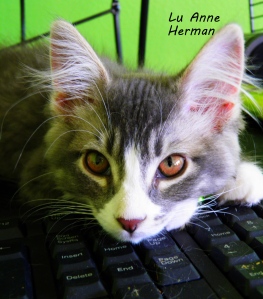 Henri with the most unique and intense eyes i’ve seen!

when out of the nursery, Henri can be found trying to take over the keyboard at my computer! lol 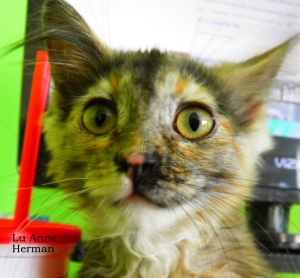 can you say cheeze portia? lol

one potential adopter went nutz for Portia as this was the pic we used for the ad in the paper!  we’ll see if she gets a new home!  specially after being returned from the last adopter (who had no issues with the kittens just didn’t know how to aclimate kittens with their current kitty). 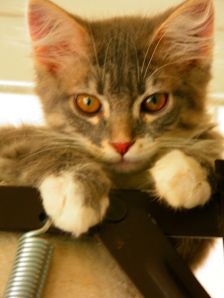 through all of today, Lacy managed to keep her cool and her cuteness!

Lacy was given the same intense eyes as her brother Henri.  she was the ultimate “diva” today.  never seen them start so young! 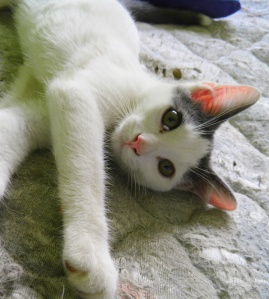 and after going thru several nicknames by me, this guy named himself: Dash!  as in he RUNS everywhere!  everything’s hurry hurry hurry!  he will slow down for play and affection tho.  but if he can get out of the nursery and hang with the rest of the PK gang, he will!!  (i think he’s attempting to make himself a permanent fixture here but i’m RESISTING! and so far doing well at it!)

all and all the meet and greet was good and we will be going back soon to do it again if need be.  if, by chance, you happen to pass thru the Glenwood Springs, Colorado area, check out High Tails Dog and Cat Outfitters.  it’s a very cool place and the owner Laurie knows lots of about nutrition too!  they are also organizing a Co-Op for pet owners to get more healthy locally made food direct from the local ranchers, which is pretty cool (in response to the way so many of today’s petfood brands are getting downgraded and filled with JUNK and YUK!)  You can find out more information about them here:  http://www.hightailsco-op.com/1401.html

we are ever so greatful they let us do kitten meet and greets there!