Well for the next post or 2, at least!!  lol  I have to give my doggies due credit for not only patiently living with 7 cats and 2 kittens, but for also putting up with me at times.  Like those times when I’m really busy and I have to go work and leave them home, or have to choose between them which one to take with me and the other 2 get left home.  Or when I’m just really busy period, and can’t spend time with them, walk them, play with them.

As everyone knows, dogs tend to desire alot more interaction with their families than cats do, and sometimes, that can be a challenge when there’s work, school, home improvment, life in general, in the way.

I share my life with 3 dogs, one which you have already met in this blog, and that’s Greta.  I must give Greta credit as well as she has alot of patience for the other 2 canines in our lives who are young and can be a challenge to her nerves at times.  The other 2 are Shyler and Avé (short for Avé Maria).

My love of dogs started with my first dog who came to me not as  a child but in my early thirties.  Her name was Nakeehta Simone, Keehta for short.  She was a keeshond (pronounce kaaays hond) and of course, holds the place of BEST DOG EVER in my heart.  Like your first love, your first dog is just that; the first and none other can compare.  Here are some pics of Keehta.

my favorite pic of keehta. you can see greta in the background 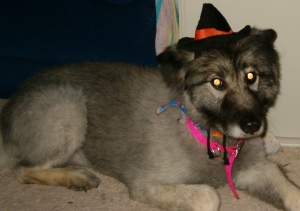 keehta in the spirit of halloween

The first pic of Keehta is how I”ll always remember her.  She had this happy go lucky attitude and you could even see it in here “trot” that she would get around with on any given day.  She loved everyone and altho “huge” for her breed standard (which I couldn’t have cared less), she was a looker and received comments everywhere she went.  Everyone loved Keehta, and for the majority of her life, she spent it as the only dog and with 2 other cats; my cat Lizzy and my mom’s cat Cinder (that’s another blog).  It wasn’t until we moved to our own space and after a few years, that Greta joined out family along with a few other cats along the way.

Keehta and my oldest cat, Eli, were the best of buds.  They would play all the time, or until Eli would try her patience and then she would show him who’s boss.  Keehta got along with everyone.  Dogs and cats alike which made her the “ideal dog” because no matter who came to visit, if they had other pets, she welcomed any and all with open paws.

About the only person I ever knew that Keehta didn’t like was my sis’s xhusband.  She could not stand him and would have bitten him on a few occassions  had I not been there.  My sis took in a cat I had, and that kitty took up the habit of peeing on my sister’s husbands clothes and belongings.  Unfortunately, despite trying to tell my sister “something” about the character of her new hubby, that kitty wound up being paying for his actions with his life due to my sis’s new hubby’s demands.  If only she had listened to the cat and not the husband!!!  Of course, Keehta’s behavior came later towards him and I was sold!  That was 2 different animals opinions and out the door he would have gone had he been associated with me, but that’s just my opinion.  Needless to say, he eventually became an X.  Call me crazy but I refuse to sacrifice any of my pets for a relationship.   Anyways, back to Keehta…

Keehta not only taught me how to be a dog owner, but she also taught Greta, the retired racing greyhound I rescued, how to be a dog.  Retired racers literally don’t know how to be dogs because they aren’t allowed during their racing “careers.  So Keehta took up the task to teach Greta, about play, how to eat, how to be happy, show excitment, be sad, roll in the grass, be nice to the kitties, and of course, her line in the doggy totem pull.  The amazing thing about Keehta was she never felt threatened by Greta or got jealous and would even share the rawhides with Greta.  Each of them would patiently take turns chewing until the bone was either gone, or they were both worn out! 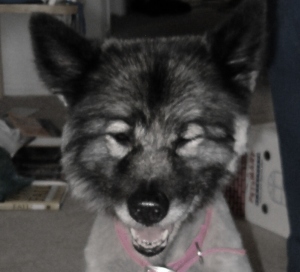 keehta givin' me a wink...the flash is too bright mom! 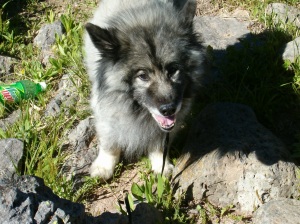 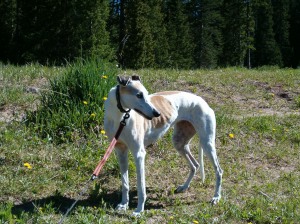 To this day, I see the remants of Keehta’s teachings to Greta in a variety of ways.  For instance, Greta wakes me up by “shaking” the same way Keehta did, or by loudly hitting her nails on the floor (same as Keehta).  Keehta even taught Greta how to “tiptoe” when I was asleep so she wouldn’t get caught when she was doing something I didn’t want her to. (My dog Shyler has picked up on this little trick as well, ty Greta! lol)   Keehta also taught Greta how to drink water in the middle of the night without waking me as well.  (Talk about thoughtful dogs)!

From the time she was a puppy, Keehta slept at the foot of my bed on the floor, Greta followed this same habit as well.  They also both snore!!!  And have very vivid dreams.  Both Keehta and Greta had their own crates and altho they weren’t class as in cuddling with each other, I still feel that there was a deep bond between them, and altho Greta didn’t exhibit any “mourning” period upon Keehta’s passing, I do believe that she has decided to honor Keehta on a daily basis by “aging with grace” the same way Keehta did.

Keehta was also extremely smart, talented, and intelligent.  She a way of dog “smiling”, especially when she was in trouble, and also performed a variety of tricks, as well as having a very endearing way of “talking” to you a well.  I really  miss that about her!

In the late fall of 2005, Keehta began exhibitting signs of stomach problems.  The vet that I had at the time, was not willing to do a whole lot to remedy the situation and simply prescribed a diet of “rice and chicken”.  By the new year, Keehta had dropped weight and was not only having trouble controlling her bowels, but seemed very unhappy and so I took her to a different vet for a second opinion.  This turned out to be the best thing as she rebounded and seemed to be doing better on a prescription diet, at least for awhile that is.  By the end of april of 2006, Keehta was a skeleton of her old self.  She had no control over her bladder and bowels whatsoever, and her face and eyes were sunken in.  She had just turned 14 on the 9th, and since hr bday, she had literally been wasting away at almost half a pound every cppl of days.  I knew it was time and couldn’t stand to watch her to continue to deteriorate.  I made an appt with the vet to have her gently put to sleep.

The vet was shocked at the change in her appearance when I brought her in; her head hung low and u could literally “feel” her suffering.  He said another week or two and she probably wouldn’t have been able to continue to walk or stand.  He agree’d with my decision to put her to sleep.  She went peacefully and I truly appreciate the vet’s help with the process. It couldn’t have been a better relief than to know that she was finally at peace and no longer suffered.  He eventually determined that most likely Keehta had a form of cancer that attacked a glandular system that runs in the intestinal tract.

Keehta loved the mountains and I took her to a beautiful place in them to be buried on April 30th of 2006.  I can return to the spot whenever I wish, and so each spring.

I now watch as Greta enters her twilight years.  I know that her time will come soon as well.  Her back legs wobble with the increased issues of athritis and every day she strugglles just a wee bit more to get up from lying down.  Amazingly, her vision is still good and well as her appetite.  Maybe she will defy all the odds for her breed and live until 15.  Only time will tell, and meanwhile she will continue to be my best friends, putting up with the cats and teach the new young dogs in my life, not only manners but the legacy of Keehta who was my first!  🙂